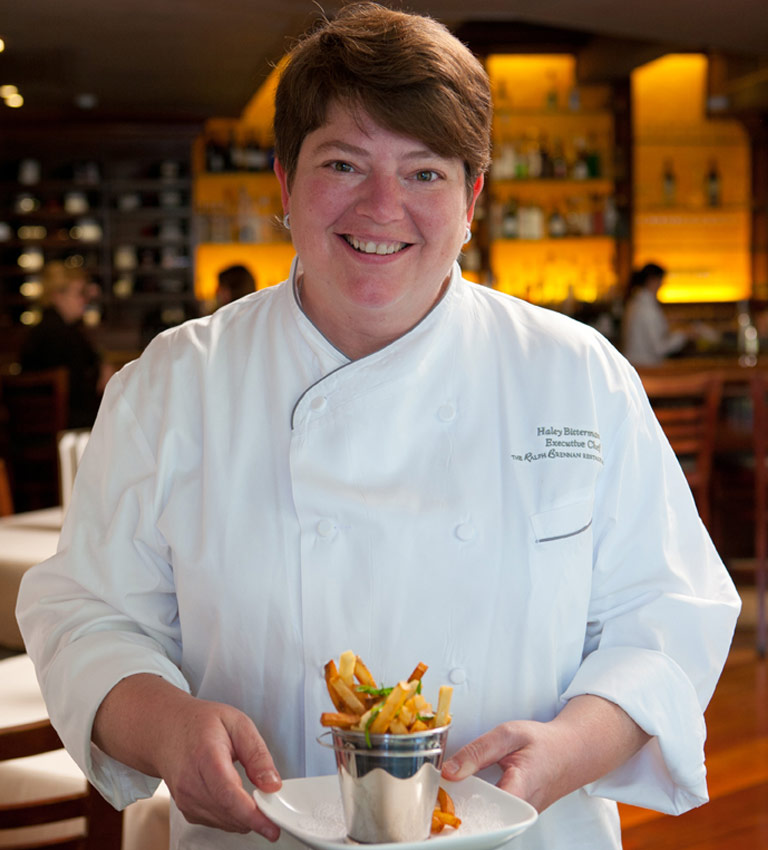 Keep It In the Family

Everyone has to start somewhere. Haley Bittermann's first "taste" of the hospitality industry was in high school, working for Domino's, where she started out as a delivery girl, was promoted to phone girl, and then to pizza-maker in short order. Looking back, that speedy upward trajectory reads as a model for her grown-up career path, from culinary school extern to top toque within one of the country's most distinguished restaurant empires.

Bittermann was raised in Cincinnati, where her British mother was a cardiac researcher at the University - but not a particularly good cook. "Everything got cooked for three hours, whether it was pork or broccoli," she laughs. When Bittermann, who had been working at a local family-run restaurant during her three years as a pre-med major at the university, declared her intention to shift gears and head to culinary school, her mother "looked a little perplexed." The restaurant had hired Bittermann as a busser. She became a bartender, then a server, until, at one point, she hurt her knee and couldn't manage the dining room staircase. She asked for a transfer to the kitchen, which she assumed would be easier. "Ha!" she says, "Little did I know... but I was hooked."

So, off she went to the Greater Cincinnati Culinary Arts Academy, which was associated with the Culinary Institute of America. One of her instructors was friends with the wife of chef Gerard Maras of Mr. B's, in New Orleans, who was to become Bittermann's mentor. She helped Bittermann land an externship. "It was terrifying, walking in the back door of the kitchen the first time", she recalls, "I had never been in a kitchen where uniforms were worn, let alone high white toques. Talk about intimidating - it was between lunch and dinner service, and there was a sea of them, and I just had to dive in and pretend it was perfectly normal." Before long, she became part of the family. "After work, we'd gather at the apartment pool with just enough beer and a copy of Larousse Gastronomique and go through one letter at a time." After graduation, no other kitchen appealed more, so back she went to New Orleans.

After a brief period as a line cook at Mr.B's, Bittermann was tapped for the team that would open BACCO, Ralph Brennan's phenomenally popular restaurant that introduced northern Italian cooking to New Orleans. But she begged to return to Mr. B's, which felt like home, and quickly worked her way up to sous chef. For a change, she picked up stakes and set off to Aspen - with a CIA extern boyfriend - and took a job at Tattoo, a nightly hot spot with one draw back: it lacked a serious emphasis on food. Bittermann was disappointed having to tone down all the seasoning, butter, and flavorful sauces she had embraced as essential elements of great Louisiana dishes. Yearning to get back to New Orleans, she made a quick trip back for Jazz Fest. One of her first stops was to see old friends at Mr.B's - where the unexpected invitation to become executive chef at BACCO was music to her ears.

She was 27 years old, and the first woman to head one of the kitchens of the Brennan family, whose Commander's Palace and other restaurants are famous the world over.

Her eyes were opened to a whole new world in the restaurant business. Her closest colleagues were two of the best-known chefs in New Orleans - the late Jamie Shannon and constant friend Gerard Maras. Bonding with 'the big boys' in those early days was an invaluable experience.

Italy and its cooking were fairly foreign to Bittermann. With a few months of Italian lessons under her belt, Ralph Brennan sent her and her husband, Russell, a production cook on her staff, to Italy to get the real deal. "It was fabulous, of course, but I learned the most important part of Italian cooking, which it shares with New Orleans cooking: each is such a monstrous part of its respective culture, and yet is more about having a great tomato warm off the vine from your backyard, than any particular style or dish. It's about the simplicity of using what you've got around you." They ate their way from Rome to Milan, taking in the white truffle festival in Alba along the way, and doing mini-stages in two restaurant kitchens. "I kept meticulous notes on the backs of receipts," laughs Bittermann, "and when I had to turn them in for my expense report, I made sure to get my scribbles back." She and Russell re-wrote the entire menu at BACCO based on their trip, and every new dish mastered the techniques and flavors they experienced in Italy.

"Mr. John and Miss Claire, Ralph Brennan's parents, were regulars at BACCO," remembers Bittermann. Miss Claire was known for her red sauce, and the true test of my own was when she gave it her blessing. Well, not in so many words, exactly; but I take pride in the fact that she always ordered a particular eggplant dish -- with red sauce."

When BACCO's lease expired in January 2011, Bittermann had been there half her life and most of her culinary life. Tears were shed, but she knew that BACCO was coming back -- just somewhere else. Beside, there wasn't time for tears: true to family history, the Ralph Brennan Restaurant Group was expanding, and two new restaurants were in development. As corporate chef, Bittermann oversees the whole range of Ralph Brennan Restaurant Group enterprises, giving the culinary program its edge - and its consistency. She clearly loves having her finger in every piece of the pie, so to speak. "Disneyland® is such a fun place to feed people; they're on vacation, and the stresses of normal life aren't there. We've taken over Café NOMA, and its slick modern design was such an exciting departure from the Ralph Brennan norm - white chairs and a bright pink long banquette. We've begun offering classes there recently, and getting to know a new clientele. Heritage Grill is yet another," she continues, speaking of the new Metairie lunch spot in whose cavernous kitchen her catering operations finally have ample space, "and so is café b," the neighborhood café, in Metairie, that opened nearly simultaneously. Red Fish Grill serves her favorite fish. And at Ralph's on the Park, she loves that chef Chip Flanagan is "a local boy, passionate about local foods, but who likes to experiment with lots of different cultures. Imagine a whole Thanksgiving meal done sous vide?!"

Bittermann has represented Louisiana at events from Montreal to San Francisco to Manhattan, and has cooked for heads of state and foreign dignitaries; she is as at home demonstrating her expertise on the Food Network and The Today Show, as she is at developing relationships with local farmers, fishermen, and purveyors for the Ralph Brennan Restaurant Group. She also takes pride in cultivating the talent on her staff, paying forward the learning and travel opportunities and critical mentoring from which she herself benefited not so long ago.

Working on Ralph Brennan's New Orleans Seafood Cookbook [2008] gave Bittermann a whole new respect for recipes and cross-referencing. "We chefs are so bad at writing things down, and when we do, well... let's just say it's great to have all these recipes not only written down, but tested." She also likes to cook at home. "But the end of my workday usually finds me eating peanut butter and jelly or a bowl of cereal at the kitchen counter watching the 11 o'clock news," she admits. Otherwise, she likes to grill out - and claims she can cook anything in aluminum foil on the grill. Like mussels. And pasta.

For Mother's Day recently, she told her 5-year-old son, Auden, that all she wanted was to catch some redfish. So off they went fishing on the banks of Grand Isle. After a few fruitless hours of nothing but catfish and skate, the corporate chef of the Ralph Brennan Restaurant Group joined her boy messing around in the tide pools. She had laid her pole down, and the line started tugging. "I was tired, sunburned, and sweaty, and not even trying anymore. But we had our redfish 'on the half-shell' for dinner!"